Nestled in the Eastern Highlands of Zimbabwe is a village named Chitenderano. The people there are joyful, giving and hard working. Between the primary and secondary schools sits a small United Methodist church.

In 2008, the congregation decided they needed a bigger church, and despite not having much materially, they set to work. First a foundation was poured; then bricks were made. Slowly, the bricks became walls. Roofing the building was a cost beyond the congregation’s immediate means.

About a two-hour drive away is Old Mutare Mission, founded by the Methodist Episcopal Church in 1899 and home to an orphanage, primary and secondary schools, a United Methodist church and a hospital. In April 2019, a fire broke out at the secondary school, burning through several buildings including the library. Nearly 40,000 books and textbooks were lost along with supplies and furniture.

Robin Landers, a nine-time missioner to Zimbabwe and a member of Union UMC, Irmo, heard about the fire, brought it to the attention of her church and found interest for a mission team. The Rev. Lloyd Nyarota, a longtime friend and a member of the Zimbabwe Conference, contacted Landers about a possible mission team and she asked about the fire. While the school buildings were insured, books and supplies were always welcomed.

Nyarota, though, was searching for a team to help Chitenderano roof their church. Because there was interest from the church for a mission team, plans began to be made. It helped immensely that the village was where Nyarota grew up. Fourteen team members, co-led by Landers and Vic Caldwell, signed up for the trip, originally scheduled for the summer of 2021. With the onset of COVID-19, plans were revamped, and the trip was postponed until March 2022. A COVID surge postponed the trip again until July; the change in schedule resulted in the loss of three team members.

Seven men and four women left Columbia July 21 to begin a two-day trip to arrive in Chitenderano. Nyarota joined them in Harare, Zimbabwe, and became the 12th team member.

The team arrived Saturday night and was warmly welcomed by the people of Chitenderano UMC. It truly felt like a homecoming, and not just for Nyarota. After dinner, the team was divided among host families for the night before coming together for worship Sunday morning.

“The community was overwhelmingly excited for us to be there,” team member Chris Lindler said in awe.

Caldwell was asked to offer a Sunday school-type lesson to the congregation before the worship service the next morning. The team was aware that the morning’s service would end in a harvest and thanksgiving service. Caldwell used Peter’s denial of Christ three times to show that even if we deny him publicly, Christ will restore us.

“What a reason to be thankful,” he said.

During the harvest portion of the service, members of the congregation came forward with monetary, agricultural or material offerings. The team gave the church Bibles, a love offering and items from South Carolina.

While waiting for the team to arrive, the congregation, led by the Rev. Honesty Sithole, had decided they wanted a metal roof and preferred professional contractors to install it. A metal roof would avoid the problem with the current church—the wooden timbers have been eaten by termites—and would last longer. Thus, they had taken steps in the weeks before the team’s arrival to weld together steel trusses. Following the harvest celebration and lunch, the men of the church and the South Carolina team carried the completed trusses to the new church.

Because the team would be staying at Africa University during the week, the congregation wanted the first truss put up Sunday afternoon so a picture could be taken and the team could participate. Several trusses later, the team left the village for AU.

During the following week, team and congregation members worked tirelessly alongside the professionals to install the roof. When a delay in supplies occurred, the team changed course from the roof to the chancel area, building it up and preparing it to receive a concrete base.

“I appreciated being able to add the chancel area of the church to our project,” team member Doug Smith said.

Team leaders had emphasized fluidity to the group, and they learned to adapt with whatever was handed to them.

“How our team was able to adjust to different situations was greatly appreciated,” member Stuart Hope said.

In addition, the group was able to build wonderful new friendships with the Chitenderano people and students, who often spent their breaks engaging with the Americans. The Hokey Pokey was taught with much laughter, and timidity was quickly overcome by curiosity. Team members Tim Livingston, a retired principal, and Jim Miller spent part of a day at the secondary school seeing how things were different from and the same as U.S. schools. The rest of the team spent the same time hiking up Nyakuni Mountain, a holy site for the village. There, they experience God’s natural wonder as well as saw cave paintings that are estimated to be several hundred years old.

COVID testing kits were left with the local health clinic and were greatly appreciated by the staff.

At the end of the week, with District Superintendent Tiriwanhu Stephen Magomo and Sithole leading a joyous service, Caldwell and Landers were invited to join them in placing a Bible and hymnbook in the center of the chancel area. The area is marked by bricks that will be left unplastered and will serve as a reminder of this partnership to future church members.

Caldwell and Landers announced to the congregation that money was available to plaster the church both inside and outside. Joyful praise—the team’s new favorite hymn, “Praise God, Alleluia”— and tears rose up as hugs were given all around.

“I am humbled,” Nyarota said. “I love you folks … truly missionaries of hope.”

The team and congregation recognize the true partnership between Union and Chitenderano UMCs, and it is hoped that the partnership will continue as the church progresses toward completion.

Upon leaving the village for the last time, the team headed to Hilltop UMC in Mutare and visited Ishe Anesu, an afterschool program that has been run for many years in the Sakubva community. The children performed a skit based on the Good Samaritan, and the team left supplies that had been requested, including New Testaments; Bibles donated by Mill Creek UMC’s Friendship Circle, Columbia, for high school students; hygiene supplies; and small bottles of hand sanitizers from the conference office.

Books, donated by members of Union UMC, were delivered to Kudakwashe Tagara, librarian at Hartzell High School, as were textbooks requested by the school. The team delivered supplies to Fairfield Orphanage and was given the chance to interview some of the high school students. Marjorie Rehlander conducted the interviews and was impressed with the students, seeing bright futures ahead for them. While that was happening, the rest of the team played with the children, spoke to their caregivers and asked questions.

The second Sunday of the trip was spent at Bethsaida UMC in Hatcliffe, a community within Harare. Bethsaida was built by three teams, all from the South Carolina Conference. Livingston was asked to preach, and Nyarota translated his words into Shona. Taking his cues from Genesis, Livingston spoke on God being there in the beginning and is there for us today, tomorrow and into eternity. The team was able to meet briefly with Bishop Eben Nhiwatiwa Monday morning at the conference offices.

During the team’s reflection time, spent in Harare and at Victoria Falls, each member took time to reflect on what brought them to Zimbabwe and the relationships that had been built. Many of them recalled God moments experienced throughout the two weeks and were sorry they had to leave the country.

“The work and worship services were successful and meaningful, but the friendships that were strengthened and relationships that were built are godly,” Landers said.

“A willingness to love without conditions,” is how Livingston recalled the people of Chitenderano, and that was echoed by most people. “Seeing their faith in action” was awe-inspiring as was their complete hospitality, said Rehlander.

The team arrived back in Columbia Aug. 5 and was welcomed home by friends and family, including the Rev. Stephen Taylor, pastor of Union.

Since leaving, the team has heard from Sithole and received pictures that progress continues on the church. Plastering is about done, and air vents have been ordered. Doors will be measured and decided upon in the coming weeks. 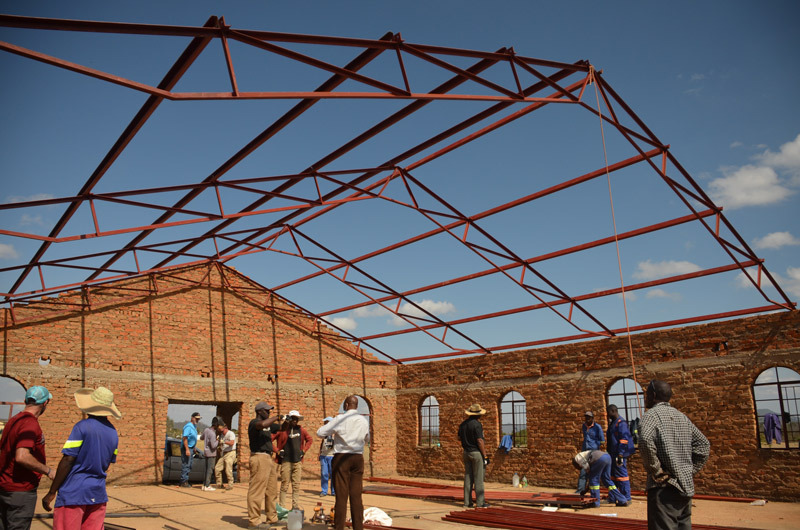 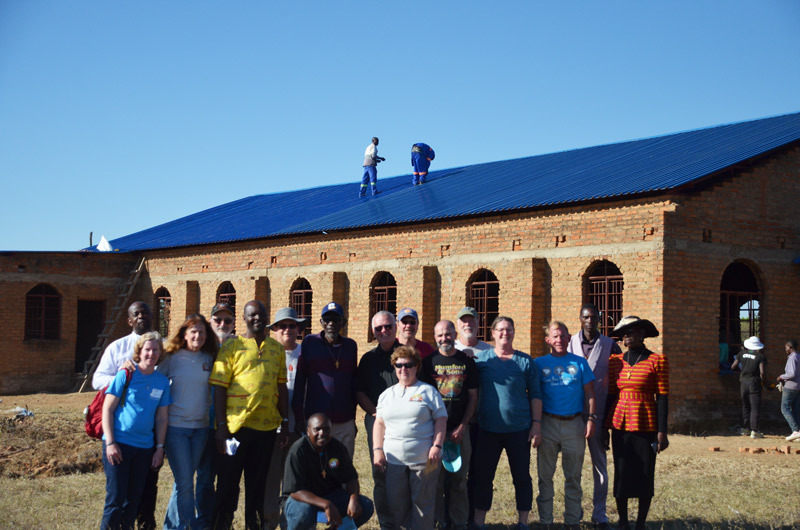 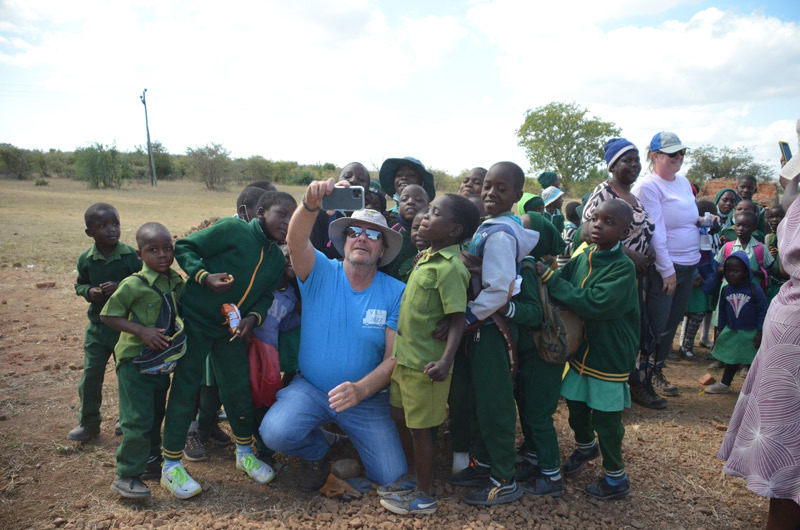 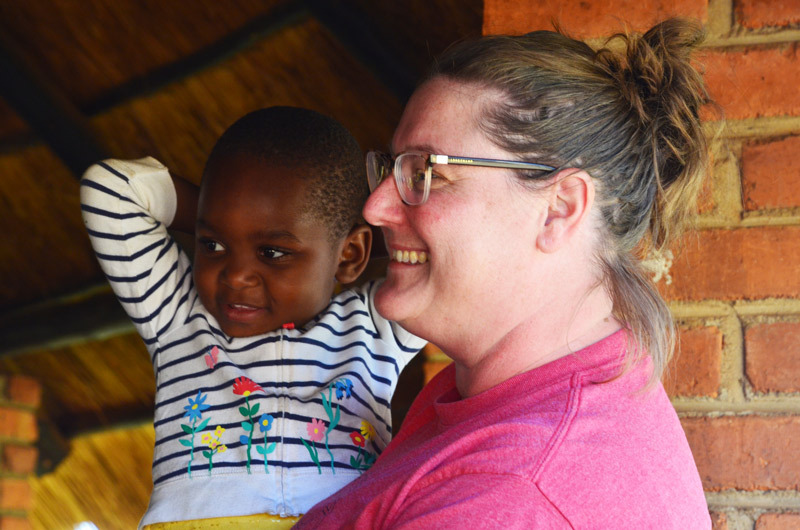 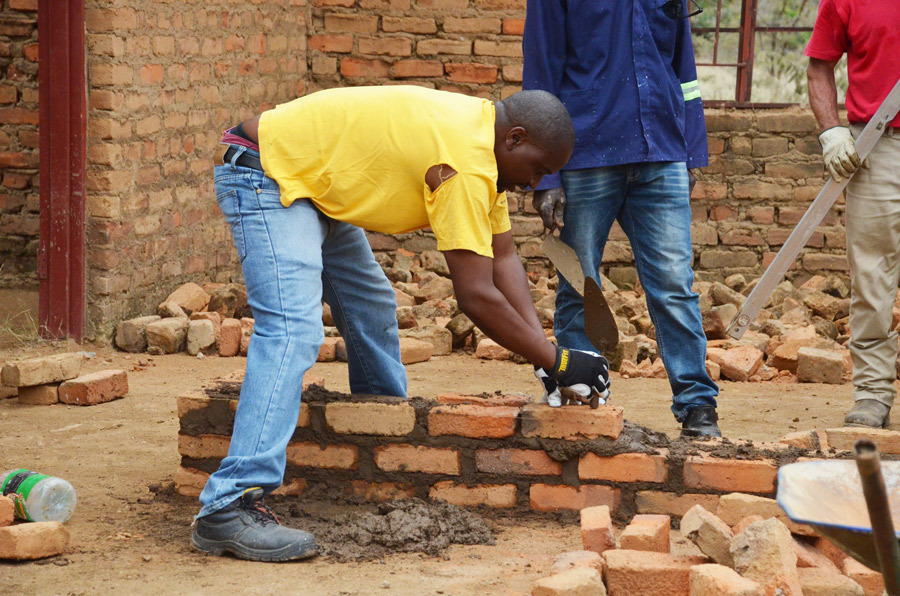 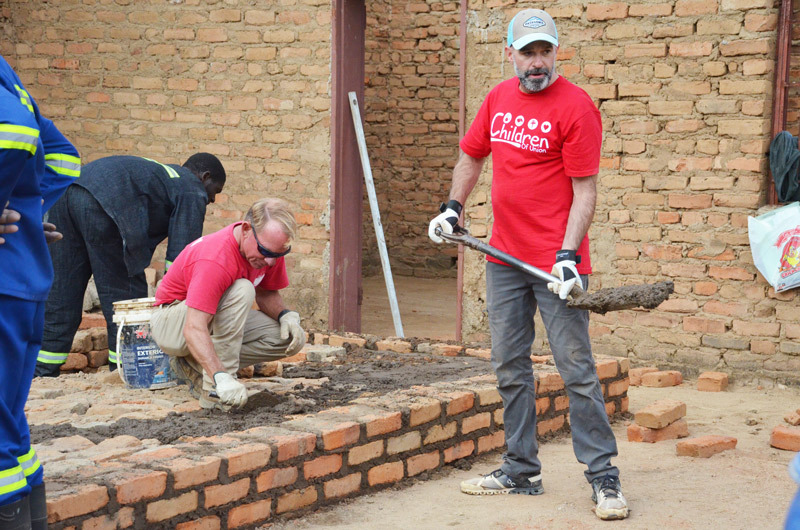 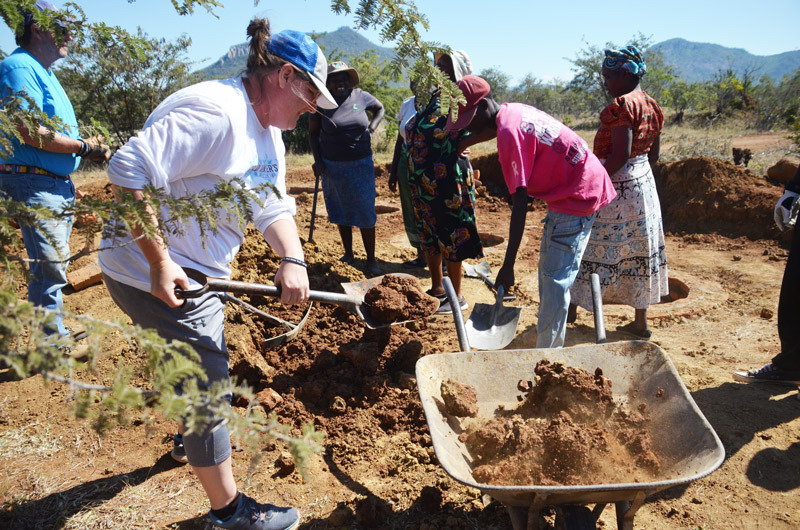 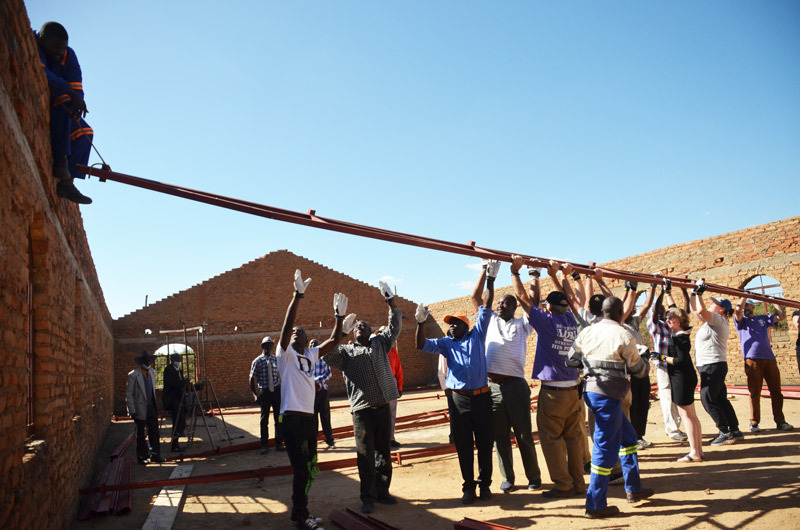 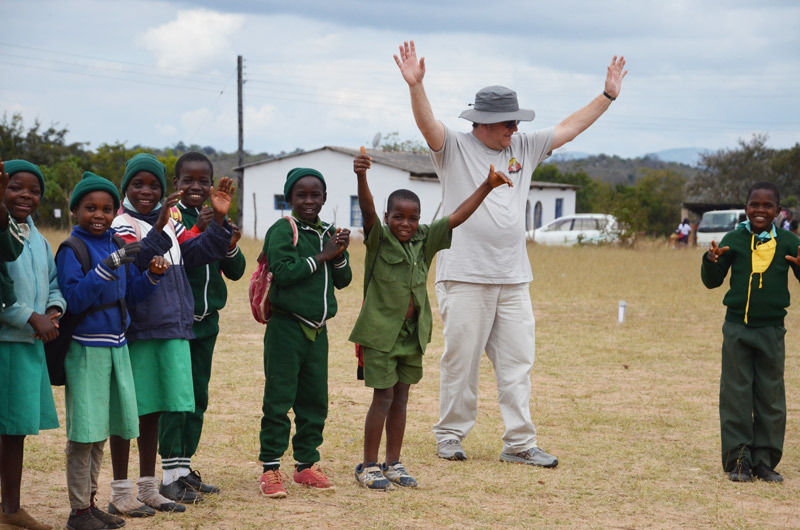 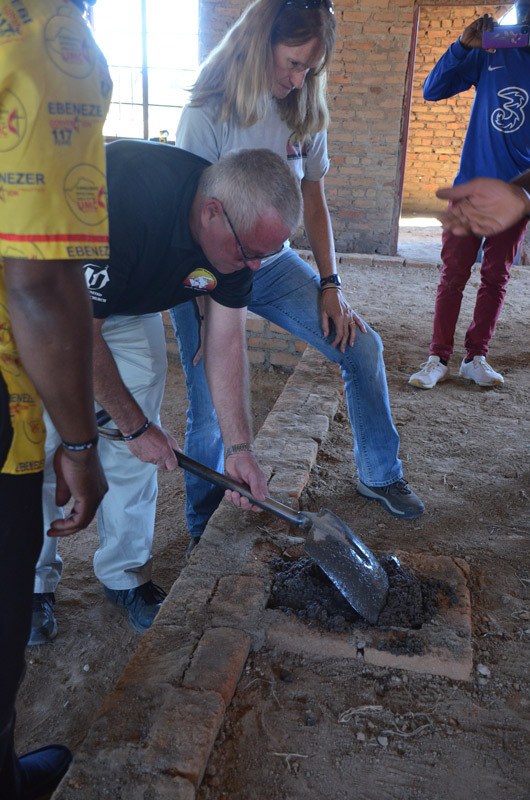 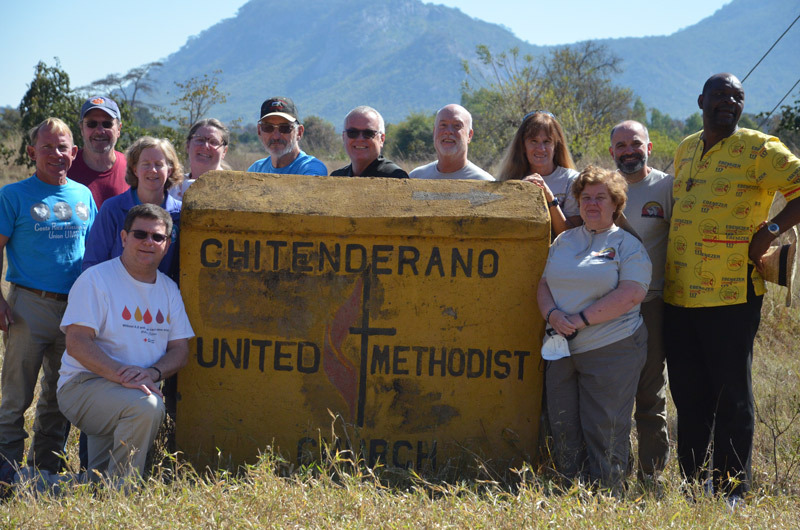 (All photos by Allison Trussell)

Up Next Salkehatchie returns